The history of the Museum He had the château listed on the Monuments Historiques additional inventory on May 11th 1932. During the French Occupation (December 1942), he had the French administration list the site so it would be protected from the German troops' sporadic stays in the château. Paul Métadier dreamt of opening a writer's residence here in the 1930s. But his son, Bernard-Paul (born in 1918), had a real passion for Balzac and suggested opening a museum devoted to the illustrious author.

In 1943, Paul Métadier told a journalist that he agreed with the idea of a museum and summed up the concept: "I want to restore this old residence to its former glory by making it into a museum. Yes, there are other Balzac museums, but Saché has the unique appeal of a romantic setting that has been untouched for a century. The house's old stones still hold the literary giant's spirit so, in terms of material, it won't take much to revive the magical atmosphere that countless locals already know Saché for."

When it was founded, the museum only had a few rooms including the reception rooms and Balzac's bedroom. The Métadier family donated the château and the museum's first collections to Indre-et-Loire Council. Bernard-Paul Métadier was made the museum curator between 1958 and 2001. Major building work began in 1964 until the 1970s to safeguard the building, provide public access and adapt the site to a museum layout.

The Balzac Museum - Château de Saché was given a new layout for the first floor reception rooms in April 2015. True to the museum founder's work, the site's bond with Balzac was brought to the fore. With the help of Jean-Jacques Gautier, inspector at the Mobilier National, and the fabulously talented Mobilier National tapestry studio, the new furniture collections now reflect the period when Charles X and Louis-Philippe were on the throne, which is when Honoré de Balzac was a regular guest in Saché. They also tie into the novelist's literary work as the furniture in his books reveal his characters' social status, personality and background. The new layout conjures up the atmosphere of the Château de Clochegourde created by Balzac in The Lily of the Valley: backgammon table, tapestry frame, single-braided white percale curtains, chair cushions, Boulle-style cabinet, carved wood Louis XIV chairs, white porcelain vases with gold details and family silver capture the Mortsauf's wealth and the ensuing drama.

New permanent collection halls elevated the Balzac Museum - Château de Saché visitor experience in the second floor apartments from January 2017. Reminiscent of Mademoiselle de Verneuil's water closet lit by an ox-eye window in The Chouans, a small bathroom was built in the room next to Balzac's bedroom. The understated furniture matches the bed and wing chair, assumed to be here when the novelist would stay here, and revive the atmosphere Balzac described in his letters: I am happy to be here, like a monk in a monastery (letter to Mrs Hanska, Paris, March 1833). In stark contrast to Balzac's modest apartment, an opulent bedroom now stands in the adjacent room. Mahogany furniture, plush crimson curtains, religious paintings by famous artists, symbolic sloped canopy bed: the details all come together to bring to mind Abbot Chapeloud's apartment, the source of much envy among his brethren in the Touraine novel The Vicar of Tours. Last but not least, two other rooms from The Human Comedy appear in a second floor gallery: visitors are transported to Derville's dusty legal office (Colonel Chabert) or Fœdora's intimate boudoir (The Magic Skin). 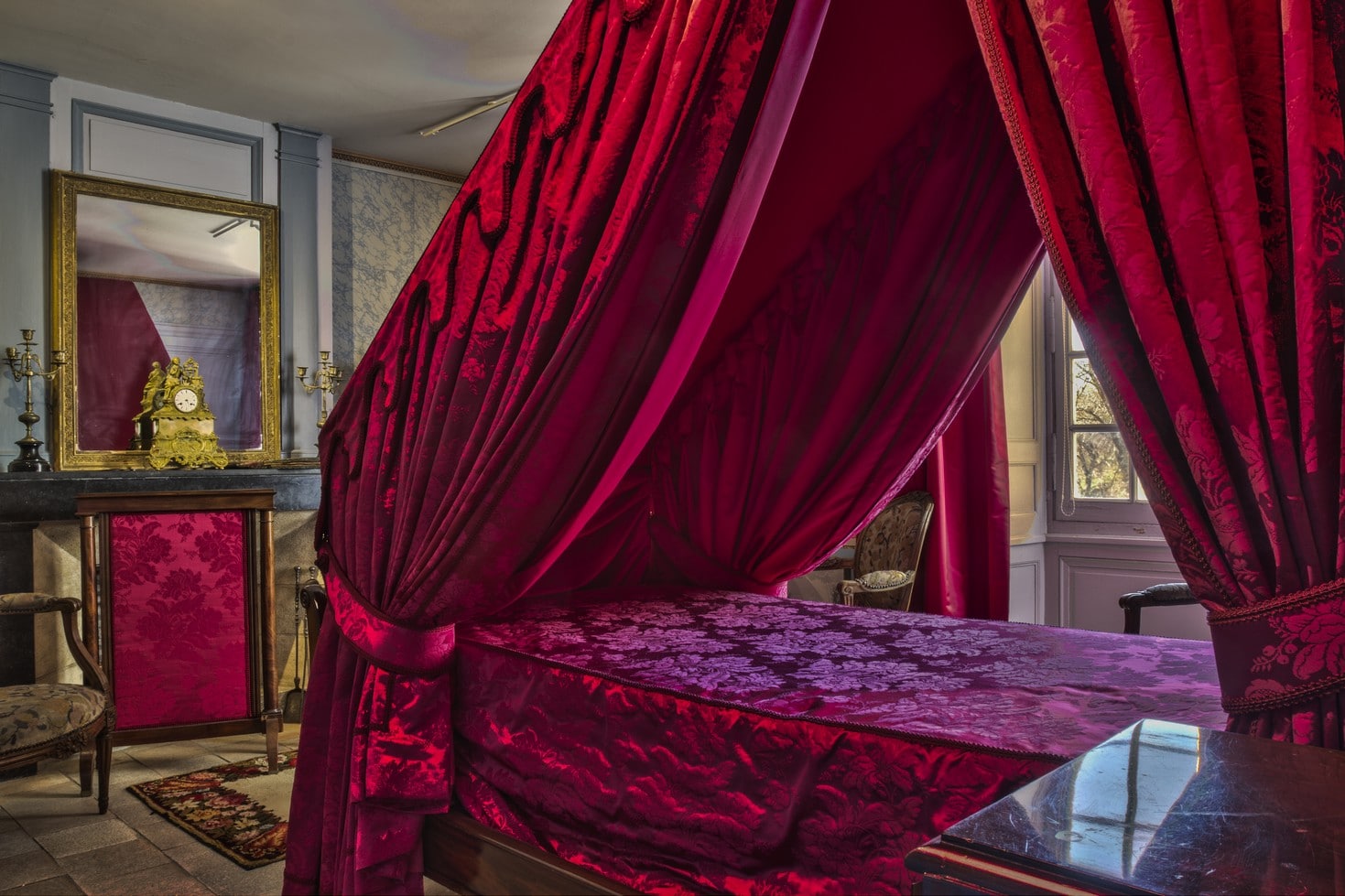